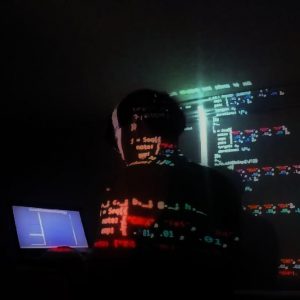 In addition to exhibitions, the SBCAST Courtyard will feature a Beer Garden, Spanish tapas, music and more.

In Suite D, SBCAST visiting artists-in-residence Artificial Nature (Haru Ji & Graham Wakefield) will exhibit “Portrait”, an audiovisual animation and real-time generative simulation exploring boundary realms between the living and the non-living, familiar and alien, body and world. A human form is inhabited by a writhing algorithmic network in which each segment tries to maintain its relationship with another, bubbling and crackling as it evolves. It is a self-portrait, both in terms of its metaphorical play of nature and artifice, as well as by synthesizing earlier independent work by each of the artists with a scanned point cloud of the artist’s body. This work was recently exhibited at the Currents New Media Festival, Santa Fe, as a standalone work running on a pair of Raspberry Pi computers. Haru Ji and Graham Wakefield have been exhibiting interactive and immersive works of complex “artificial natures” together since 2008, at numerous international venues including La Gaite Lyrique (Paris) and ZKM (Karlsruhe), and leading events such as SIGGRAPH (Yokohama), ISEA (Singapore), and Microwave (Hong Kong).

In Suite F, SBCAST will host a performance of electronic music by live coding, led by musician, artist, and software developer Charlie Roberts, using the Gibberwocky system (http://gibberwocky.cc). Live coding is an experimental performing arts form and a creativity technique centered upon the writing of source code and the use of interactive programming in an improvised way, often to create music and projected visuals among other media. In his performance at SBCAST Charlie will be writing code in Gibberwocky to control Ableton Live, a popular piece of software for electronic music production. Charlie is an Assistant Professor in the School of Interactive Games and Media at the Rochester Institute of Technology, where his research examines human-centered computing in digital arts practice. He has performed in the live coding genre throughout North America, Europe, and Asia. Gibberwocky is a suite of live coding software co-authored by Charlie Roberts and Graham Wakefield, and was recently presented at the New Instruments for Musical Expression conference in Copenhagen.