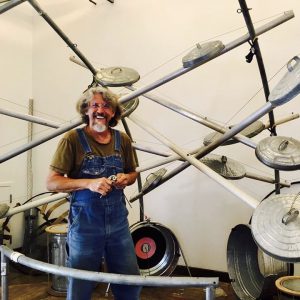 Robbie Conal will exhibit posters and prints in Studio E. The Washington Post has called Robbie “America’s foremost street artist.” His work has been featured on “CBS This Morning,” “Charlie Rose,” and in Time, Newsweek, The New York Times, Los Angeles Times, The Wall Street Journal, The Nation, Vanity Fair and People magazine.

In 1986, angered by the Reagan Administration’s rabid abuse of political power in the name of representative democracy, Robbie Conal began making satirical oil portraits of politicians and bureaucrats, turning them into street posters. He developed an irregular guerrilla army of volunteers who helped him poster the streets of major cities around the country. Over the past 30 years, Robbie has made more than 100 street posters satirizing politicians of all stripes, televangelists, the news and entertainment media, and global capitalists. This exhibition is curated by Maiza Hixson in conjunction with the MFA colloquium series held at UC Santa Barbara. ONGOING EVERY 1st THURSDAY AT SBCAST:

The Beer Garden is a curated space that takes place in the back courtyard on the first Thursday of each month. It is free to visit and the featured beer is $5 per glass.

Rooftop Tea and Crumpets
Our Tea and Crumpet event is hosted every Thursday afternoon, from 4-5pm, on the rooftop of SBCAST. Join us for pleasant banter, delicious hot and cold teas and toasted crumpets! Come say hello to your friends at SBCAST and get ready to curl your pinky with us.