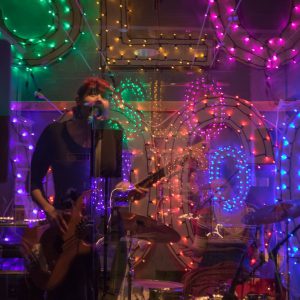 Americana Band, The Luck, will play in Suite E in Maiza Hixson’s Mayoral Campaign Headquarters at 7 pm. The Luck is an Americana band from Lompoc, CA. Their unique line up of bass, drums and vocals offers a new take on Rockabilly, Folk and Blues. Angie Nightmare (bass and vox) and Anna Maretta (drums) have been playing together since early 2011. They are often joined by Scottie Fugatti on guitar. Their partnership is based on a mutual love of rhythms, the desire to tell a good story and killer outfits.

3-Minute Film Festival in Suite D will offer two screenings (5:30 and 8:00 p.m.) of over 15 selected films entered from countries around the world, including the US, France, Ireland, Jamaica, Italy, Iran, India, China, Switzerland, Azerbaijan and the United Kingdom. The Audience will be able to vote for their favorite. Seating is limited; no advanced reservations will be taken. Donation of $3 is suggested at the door. A discussion follows, led by Founder and Festival Director, Lynn Holley.