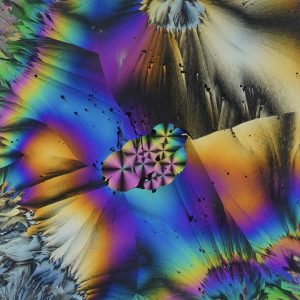 Maria Ferreira’s “Into the Crystal Hourglass” features immersive and interactive installations as well as experimental films and soundscapes. This multimedia exhibit is a two-year culmination of the artist’s experiments with time and light. Ferreira began this body of work during a year-long Artist in Residency at an esteemed chemistry laboratory at New York University, where she began studying the self-generative structures of synthetic crystals and the body’s relationship to nature and technology.

Maria Constanza Ferreira is a Venezuelan interdisciplinary artist working within video, experimental animation, photography, and installation. Her work has showcased internationally at places such as Times Square’s Midnight Moment, MoMA PS1, The Exploratorium Museum, Slamdance Film Festival, IndieLisboa Film Festival, São Paulo Museum of Image and Sound, the SFO Museum, and the Museum of Sensory and Movement Experiences in SB. During Ferreira’s Artist Residency at a Chemistry Laboratory within NYU, her work was funded by the National Science Foundation. Her films have been nominated as Vimeo’s Best of the Year films in the Experimental Category and in 2020 and she won the GLAS Animation Festival Grant which is the only grant for independent animators in the US. Ferreira earned her BFA in 2017 from the Rhode Island School of Design as a double major in Film/ Animation/Video and Graphic Design. Maria Constanza Ferreira is currently an Artist-in-Residence at SBCAST.