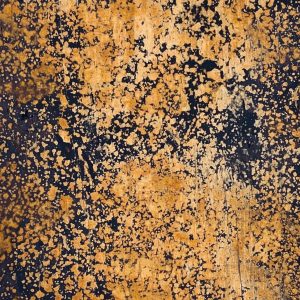 Meighann A. Helene kicks off the three weeks long showcase with her “Rusted Roots” series, which focuses on “doing organic things to organic things, in inorganic methodologies”. It will include works that feature cold-casted organic matter in iron, bronze, and copper. Using a special process Helene incorporates expedited oxidation to bring in rich rusted oranges and patinaed blues and turquoises that vibrantly elevate these materials into new realms that are unique and unnatural, while reminiscent of ubiquitous tendencies found in nature. In addition, the series will incorporate 3D printing, shadow play, and more.

Meighann A. Helene is a multi- and interdisciplinary artist and performer. She holds a handful of degrees from SBCC ranging from design to philosophy, and a degree in cognitive science with an emphasis in design and perception from UC Berkeley. Helene is Board Chair of TVSB, Santa Barbara’s community access TV station and production/media studio, and the Board Treasurer for Fishbon, a local nonprofit incubator for artists, scientists, designers, and engineers. She also currently works for IBM on their Data Science and AI Elite team, specializing in strategy and UX design. Recipient of over a dozen Laurels and an internationally recognized award-winning video producer, Helene’s work has been seen at the Museum of Music and Instruments (MOMAI) and she has worked on several large-scale installations, fire performances and more at international festivals such as Burning Man. Helene in currently an Artist in Residence at SBCAST.