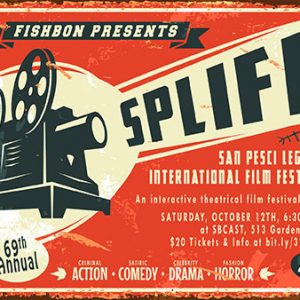 On January 24th, prepare to enter the dizzying world of celebrities and film stars, getting swept up in their drama and machinations for fame and glory at the San Pesci Legends International Film Festival (SPLIFF)!

This event is both a riotous party and a dramatic adventure, where participants play an integral role in the unfolding of the plot. Status-obsessed actors and agents will seek your help in sabotaging the careers of their fellow award nominees. Join the paparazzi, collect autographs for profit, or simply sit back and enjoy the show. Just don’t be late for the red carpet ceremony!

SPLIFF is a loving satire of both film festival and celebrity culture. With Hollywood-themed libations, Indian delicacies by Nimita’s Cuisine, music by DJ Gryphn and aerial performances by Elevated Dreams, plus Q&A panels and oddball films, SPLIFF is a Santa Barbara experience like no other. Ages 21+ only. Tickets $25 online, $30 at the door.

Spend an evening with the stars… before they come crashing down!