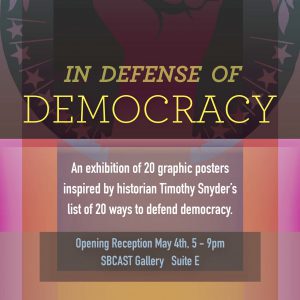 An exhibition of political posters inspired by American historian Timothy Snyder’s list of twenty ways to defend democracy. Exhibition on view through May 31. For more information or to schedule a visit to view the exhibition, email maizahixson@gmail.com.

Posters free with suggested donation of $5 to be donated to the American Civil Liberties Union.

In Defense of Democracy features twenty artists who employ the poster as a political medium, to agitate and create resistance against the reactionary forces threatening American civil rights. Approaching art from an activist standpoint, my fellow co-curator and artist Lucy Holtsnider invited select participants to illustrate one of acclaimed historian Timothy Snyder’s Twenty Ways to Defend Democracy. A scholar who has studied the foundations of Nazi Germany, Snyder’s recent book On Tyranny: Twenty Lessons From the 20th Century is a cautionary rubric for thwarting fascism in America and the impetus behind this exhibition.

Throughout the past century, visual artists have designed iconic popular imagery for economic, racial and social justice movements. In the 1930s, Hungarian-American muralist Hugo Gellert designed lithographs for the Communist party and covers for the Daily Worker magazine, which championed labor rights for all, from the coalmines to the factory floor. Taking visual cues from modernist Russian Constructivist art and the photomontages of the Bauhaus, another leftist paper entitled Labor Defender also galvanized progressive groups around equality.

The most well known artist of the Black Panther movement, Emory Douglas, designed posters that borrowed styles and techniques from German artists like John Heartfield and George Grosz as well as Mexican artists like Jose Guadalupe Posada and Elizabeth Catlett.[1]

Canonical feminist groups such as the Guerilla Girls and Riot Grrrls have designed posters, flyers and zines that indict and critique male-dominated culture and confining gender roles for women. Kathleen Hanna, synonymous with feminist punk bands Bikini Kill and Le Tigre, was a punk zine writer and pioneer of the Riot Grrrls. In response to the movement as primarily white and middle class, women of color like Mimi Thi Nguyen designed zines that critiqued white supremacy within punk music culture.[2]

With President Donald J. Trump’s proposed budgetary cuts to the National Institute of Health, Environmental Protection Agency and National Endowment for the Arts, artists, activists and people of all backgrounds across the United States have taken up pen and paintbrush to create protest signage. Famously, on the night before the D.C. Women’s March of January 21, 2017, stores such as Office Depot, Staples and Target were completely sold out of poster board, forcing some protestors to make signs out of moving boxes and other materials.[3]

Making political protest signage provides a productive channel and release valve for frustrated citizens to voice their dissent. As an exhibition, In Defense of Democracy seeks to employ anti-fascist posters as an educational tool to motivate viewers to counteract oppression by understanding the specious language, branding and manipulation promulgated by Trump’s ministers of culture and propaganda. Underlying the political dissent implicit in each of the artists’ works on view in the exhibition is the concept that In Defense of Democracy serves to decry the ascendance of authoritarian regimes, both at home and abroad.

Read Snyder’s lessons from his latest book On Tyranny: Twenty Lessons from the Twentieth Century: Scientists connected to this event: