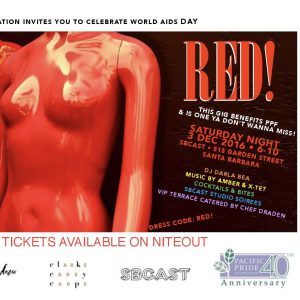 Enjoy an evening with Pacific Pride Foundation in recognition of World AIDS Day.  World AIDS Day is held on the first of December each year and is an opportunity for people worldwide to unite in the fight against HIV/AIDS, and show their support for people living with the disease while also commemorating those that have lost the battle.