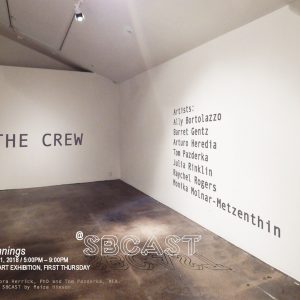 The Crew at SBCAST: Underpinnings
Introducing: The Crew, a collective of preparators and professionals from the Museum of Contemporary Art Santa Barbara (MCASB). “The Crew” is made up of the people that handle and install artwork at MCASB. Offering a peak behind the scenes at the workings of the museum, this exhibit aims to acknowledge and showcase that the execution of a museum’s title artist’s exhibit, relies on the work of the crew, a group of artists, craftspeople, and researchers who work below the line in the production of every exhibit. What comes across as a single curatorial vision has heterogeneous creative underpinnings. In coming together as a collective, The Crew—and the current exhibit—highlight the concept of artistry in groundwork, in process, and in form. “As an exhibition concept, Underpinnings speaks to the invisible power structure of institutions and the real people who make curatorial missions manifest. Everywhere I have curated, I have encountered installers, “behind-the-scenes” workers, arts educators, and others who were dedicated artists above all. These are the people who deserve a stage.” -Maiza Hixson, Co-Director and Curator, SBCAST.
Underpinnings, the inaugural exhibition of the newly-formed arts collective, The Crew, presents a selection of work representative of each artist’s current research and practice, intersecting installation, painting, photography, and performance.
The Crew Artists: Ally Bortolazzo, Sara Dildine, Barrett Gentz, Arturo Heredia, Monika Molnar-Metzenthin, Tom Pazderka, Julia Rinklin, Raychel Rogers
Curators: Debra Herrick, PhD and Tom Pazderka, MFA.
Organized at SBCAST by Maiza Hixson.