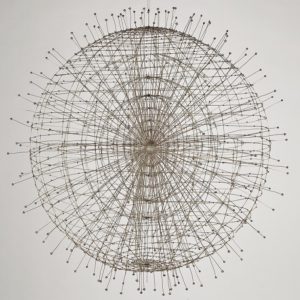 When Richard moved from the east coast to Santa Barbara, the atmospheric light and stark beauty of the Southern California landscape made an immediate impression on him; he shifted his attention to the College of Creative Studies at UCSB to study painting and sculpture. He spent a year at the Academy of Fine Arts in Venice, Italy, studying painting with Emilio Vedova, and performance and puppetry with Donato Sartori.

While living and working as an artist in Los Angeles, Richard immersed himself in the practice of the art and science of Iyengar Yoga. The yogic focus on the subtleties of mind and body had a profound influenece on the process by which he made his art.

McLaughlin works in both sculpture and painting. His public art is seen across Southern California. Locally his large mural [painted with Ben Bottoms], that celebrates Santa Barbara’s parades, can be found behind the Granada Theatre.

His latest large project is a motion-activated kinetic sculpture that is also a percussive musical instrument.