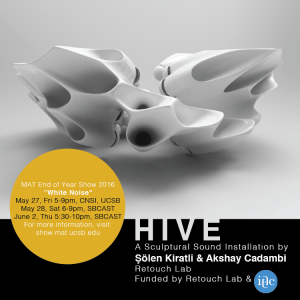 HIVE is a sculptural sound instrument, in which the design of sound and spatial geometry are taken as a unified notion. By creating a harmony between the structural features, physical acoustics, and the sound design, the object attempts to simultaneously contain, emanate, and be a soundscape. This hybrid system uses embedded multi-channel audio and digital fabrication techniques to create a 360º divergent sound field, and further morphs it using acoustical waveguides. The sound design adds a layer of sonic choreography that serves to accentuate the structure of the object, imploring the viewer to explore it — as one would while exploring a real-world soundscape.
Sponsored by Retouch Labs and the IHC’s Visual, Performing, and Media Arts Award.